If you read about our most recent Hometown Hospitality Hero, then you may already be aware that the Fort Smith Convention & Visitors Bureau (FSCVB) has increased its strategic efforts in positioning Fort Smith as a premier destination for large sports tournaments and related events. And thanks to the efforts of men and women in our community who have been organizing large regional and national sports tournaments for years, we area able to hit a very competitive category of business with a brand—Fort Smith, Arkansas—that they’re already familiar with or have heard about from their colleagues. So, it thrills us that we are able to introduce a second organized sports professional and Fort Smith resident, Lee Dewey, as our newest Hometown Hospitality Hero!

Lee is the Tournament Director for Fort Smith Juniors (FSJ) Volleyball, which is an organization committed to empowering female athletes—grades 4 through 12—through the sport of Volleyball.  Along with the other FSJ Board of Directors, Lee helps provide a positive and safe environment where these young girls can develop a strong sense of teamwork, pride and character. That, itself, is a philanthropic kindness worthy of praise from the community, but Lee’s efforts impact Fort Smith in other ways, too.

More specifically, we’re talking about the economic impact that the FSJ Volleyball Tournaments have on the city. You may have heard of Battle at the Fort, Border Town Brawl, or River Valley Rumble if you live in Fort Smith. However, that familiarity extends outside of the borders of Fort Smith through the entire state of Arkansas and on into Georgia, Missouri, Texas, Tennessee, and Oklahoma. But before we talk too much about the tournaments and how they impact today’s Fort Smith, we should probably start 15 years in the past, when Lee started working with FSJ Volleyball. 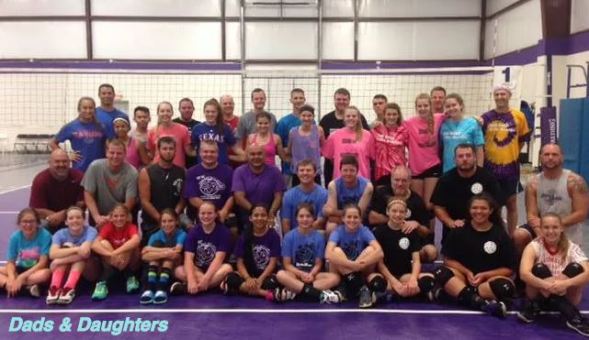 Before joining the Board of Directors, Lee was already familiar with organized sports tournaments and was highly involved in softball programs as the father of a young female athlete. So, when his daughter also became an avid volleyballer, getting involved with FSJ Volleyball felt natural. By then, the organization had been around for 5 years, but when Lee was asked to become the Tournament Director, it would become overwhelmingly clear that FSJ Volleyball would be sticking around for years to come.

Initially, the tournaments started with 15 teams, but over the course of 20 years that number has not just grown…it has EXPLODED! At the most recent FSJ Volleyball Tournaments, there were more than 205 participating teams from all around America’s midwest and southeast regions. Luckily, Fort Smith has done some growing of its own, which Lee says helps keep attendees happy.

“Each team typically brings 25 athletes, and along with that comes parents and family members who will also need lodging. The addition of some new hotels has really helped when it comes to securing enough rooms and offering brand variety to participating teams.  – Lee Dewey

Let’s talk more about that team size Lee referenced above, though. If each team typically brings 25 players, let’s just assume that there are 4 team managers (including coach) and one parent or guardian for every 2 players. That would mean that each team consists of roughly 40 people. Combined, that would be 8,200 men, women and children. If each room booked were shared by an average of 4 people, that would translate to 2,050 room nights booked and nearly $170,000 spent just on lodging during each day of a tournament. You can imagine what that figure might amount to if we also figured in dining, entertainment, gas, shopping, and even the investment related to booking the Fort Smith Convention Center and it’s 40,000 square foot exhibit hall—offers 34 ft. column-free ceilings perfect for volleyball—as the tournament venue.

According to Lee, there are some key reasons that these teams enjoy coming to Fort Smith each year. One reason is because of Fort Smith’s central U.S. location, which makes it a perfect meeting place when attendees are coming from all over the country. An important point to be made here is also the city’s close proximity to multiple major highway and interstate systems that span the entire length of the Nation’s coasts. Not only does that mean Fort Smith is a great central meeting place, but it also means that these participating teams can essentially all reach the city within a 4-hour drive from much larger metros like Memphis, Dallas, Springfield, Tulsa, Little Rock and more. But our favorite reason of all is because, according to Lee, “they feel welcomed by our community and often refer to it as the, ‘small, big town.'”

From the team here at FSCVB, we offer Lee Dewey and all who are involved with FSJ Volleyball our heartfelt gratitude for your contributions to Fort Smith’s community, its reputation as a tournament destination, the local economy, our growing tourism and hospitality industry, and most importantly to the hundreds of young female athletes that your organization has positively impacted over the last 20 years and those who you will impact in the future. Lee Dewey, you truly are a Hometown Hospitality Hero!

Error: Twitter did not respond. Please wait a few minutes and refresh this page.